You are here: Home / Mayor’s Office 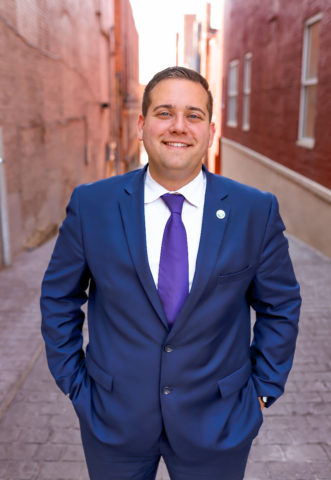 The Mayor operates the executive branch of city government and oversees the day-to-day operations of all city departments. The Mayor is also the president of the Jamestown Board of Public Utilities and chairman of the Jamestown Urban Renewal Agency by virtue of office. The Mayor drafts and submits to the Council an Executive Budget on a yearly basis.

Eager to do his part to help others Eddie moved to Philadelphia, where he taught middle school science to students overlooked by the traditional education system. As an educator, he found that the only way to make a real change in society is to roll up your sleeves and get to work. Eddie became passionate about changing the life trajectory of kids, but he was determined to find a way to make a difference in society as well.

While teaching, he attended the University of Pennsylvania Graduate School of Education. In 2012, he earned his Masters of Science in Education degree. As an advocate for science, technology and math education programs in schools, Eddie was recognized by his school as Educator of the Year in 2011, having introduced exploratory science labs in his classroom.

Determined to come back home and continue fighting for others, Eddie returned to Western New York in 2012 when he was accepted into the University at Buffalo School of Law Program.

While at UB Law School, Eddie was an advocate for children and families, working with the Buffalo community to develop alternatives to school suspension and discipline programs. In addition, he has an expansive background in legal studies, having interned with the U.S. Treasury Department and U.S Attorney’s Office, and clerked for an administrative law judge at the New York State Division of Human Rights.

Eddie received his Juris Doctorate in 2015 from the University at Buffalo School of Law and returned to Jamestown to practice law with Lewis & Lewis, P.C.  Eddie was elected the Mayor of the City of Jamestown in November of 2019 and took office at the City’s 25th Mayor in January of 2020.